New Year’s Tradition (At a New/Old Location): The Movies That Made 2018 For Me

2018 was a weird, transitional year for me. I stopped writing about movies for a huge chunk of it to focus on editing and on the job that actually pays the bills. But that’s dumb because, you know, I still have some free time I can put toward this. So I am. I’m shaking off the rust in 2019 by commemorating some of the great movies I saw the year previous, as has been my New Year’s Day tradition these last several years. My moviegoing took as much of a hit as my movie writing, so bear with me as I still haven’t seen stuff like Hereditary, Roma, Suspiria, and tons more.

Top 10 (In No Particular Order)

Sorry To Bother You

As a former call center employee who was considered “talented,” I knew this would have a special place in my heart before I went in. I came out thinking this is a contender for the satire of our era. The Coup’s Boots Riley creates a candy colored fantasia out of class, gender, and race struggles to show how our corporate overlords will never, ever stop trying to wring more out of us, to use and abuse the bodies of people they deem no better than animals—so they may as well literally turn the poor into livestock. Oh, and it’s funny. Like, really funny. Who says socialism and class war has to be humorless? 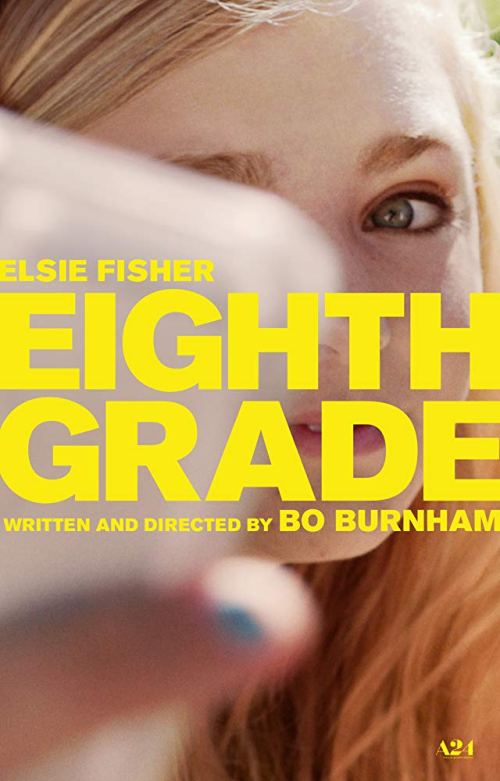 Kayla (Elsie Fisher) is in her last week of eighth grade and she’s out to sea. Her friends are mostly nonexistent, her single dad (Josh Hamilton) is a loving but often unhelpful sad sack who looks like if Stephen Malkmus got a job in some company’s accounting department instead of writing “Cut Your Hair,” and her YouTube advice channel isn’t getting the traction she hoped—probably because the ums and uhs that dominate her anxious speech don’t make for good TV. Over the course of comedian Bo Burnham’s first movie, she learns to say “no” to the shitty peers she has long wanted to impress, and we learn how to be proud of a fictional character.

While I’ve never met documentarian Bing Liu or his group of skateboarding friends personally, I know them—deeply. The skaters and drunks and addicts and dropouts in the Chicago suburbs were my pals pretty much every other weekend from the age of 14 on. This doc’s setting of Rockford isn’t far from where my best friend relocated at the start of high school, and where I spent a lot of weekends maintaining that friendship. The DNA of these areas is practically identical, from the generational abuse cycles (physical, emotional, chemical, you name it) to the Rust Belt blight to the complicated racial politics of an area where to be a minority means that you’re verrry much in the minority—sure, you’ve got white friends who love you and think they have your back, but will feel empowered to embrace casual racism in your presence because they’re “enlightened” or some other bullshit excuse. These kids are lost, repeating the mistakes of their parents, and in one depressing case, showing how the next generation’s attitudes toward women might not be any better than the ones that preceded it if we don’t call it out clearly and bluntly the way Liu does to his friends and subjects. It’s brave to be this honest about your loved ones’ serious faults in public, and I’m grateful for him.

The Ballad of Buster Scruggs 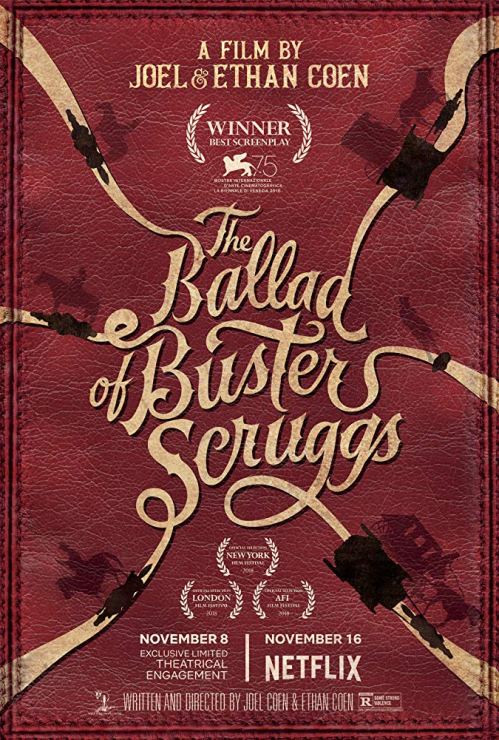 It would not be a lie for me to say I greatly admire how the Coens’ anthology of western stories features every conceivable tone with masterful pivots between each section (save for the only bum note: the James Franco story). But let’s face it: This movie is on the list because no casting has ever been as perfect as Tom Waits as a gold panner.

I self-destructed in many ways in 2018, so I am grateful this low-down, rotten year at least gave me Annihilation as a roadmap to reframe my failures and evolve the way Natalie Portman’s character, Lena, does throughout this horrific science fiction film. Her marriage is in shambles by the time her husband goes missing into the Shimmer, a blob of extraterrestrial goo that doubles as a metaphor for the constantly shifting elements in a troubled mind. Lena winding her way through mutating landscapes and nightmarish amalgamations of once-recognizable creatures (the bear screaming with a mauled woman’s voice is the scariest thing I’ve seen in years in any context, cinematic or not) is therapy on a big screen. It grows more extraordinary every time I think about it.

Spider-Man: Into the Spider-Verse 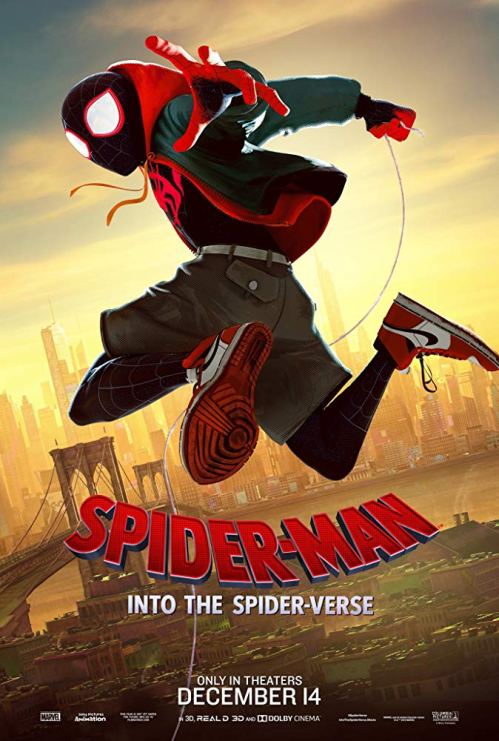 When it comes to the year’s big superhero movies, Black Panther is probably a more important cultural moment. It’s amazing, and it can be seen in my honorable mentions below mostly because other, more qualified writers can express its importance to representation, power, and Hollywood’s potential for a sea change of multicultural storytelling better than I can. Instead, I want to say that a movie with a cartoon pig named Peter Porker: Spider-Ham whacking bad guys in the head with an oversized wooden mallet is the greatest representation of comic books I’ve ever seen. That last sentence may sound like a joke, but it filled me with the kind of joy that’s usually reserved for making a baby giggle. On a more serious note, the movie’s recontextualization of the Spider-Man mythos to include biracial teens, girls, and extradimensional noir detectives is such a great way to say that sharing the cultural wealth makes things great for everyone.

This film is full of good humor, affecting drama, terror, and some of the best closeups of 2018. But mostly I’m grateful that, in the year of criminal justice reform at the federal level, we got a character like Collin (Daveed Diggs), an ex-con who makes no bones about the fact he did the crime and is still a great and improving person worthy of love, respect, and peace of mind. That’s truly radical storytelling.

You Were Never Really Here 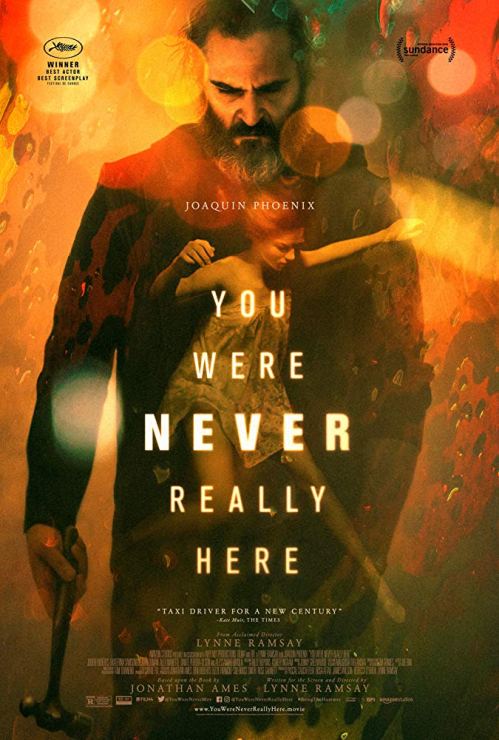 This movie feels like it resides in a monsoon. Water pummels everyone, chokes them, envelopes them. No strand of hair appears the screen un-dampened, there is no such thing as a single drop of blood, only buckets. It is only when protagonist Joe (Joaquin Phoenix) enters a dry area—a diner—that he can feel a tiny amount of peace—that is, if he can keep himself from raining his own viscera all over the place. Lynne Ramsay’s 90-minute peek into the worlds of sex trafficking, corrupt machine politics, and clinical depression hurts you in a way you need to be hurt, so you can recognize the seedy world that lives beside us. It reminds you that to be a hero in a world like this doesn’t mean smiling, wisecracking, and parades for accomplishment. It means you lose your humanity. And you do it anyway because it’s the right thing to do.

If I learned anything from my own serious mental health issues in 2018, I learned it from First Reformed: Never retreat from everyone and everything. You’ll only find despair. If you run toward others, you’ll still find despair—but a smidge of hope too. And that smidge feels like salvation.

It’s the most human thing in the world to dwell when things seem like they’re about to go horribly wrong. We cycle through our thoughts, pore over every action we took, and fret over every minute detail of our lives to find some meaning and a person or event to blame—and we perversely call it self-reflection. It’s the most socially acceptable form of torture. But here’s the thing: Sometimes things just don’t break your way. You can’t control it, and if you think you can, you’ll drive yourself to madness. Leena Pendharkar’s 20 Weeks, about a couple unraveling over the potential for their unborn baby to have a host of developmental disorders, reveals the weaknesses in men when we grow fearful, and the resilience of women who have to deal with weak men. It’s a show of female strength and a plea for male maturity, and a kick in the ass I need more often.

Black Panther, Springsteen On Broadway, Nanette, Saturday Church, First Match, A Quite Place, To All the Boys I’ve Loved Before, Cam, First Man, A Star Is Born, and probably more that I’m forgetting. Every year is a good year for movies. Remember that. Happy 2019.

Tagged as 20 Weeks, A Quite Place, A Star Is Born, Annihilation, Black Panther, Blindspotting, Cam, Eighth Grade, First Man, First Match, First Reformed, Minding the Gap, Nanette, Saturday Church, Sorry To Bother You, Spider-Man: Into the Spider-Verse, Springsteen On Broadway, The Ballad of Buster Scruggs, To All the Boys I’ve Loved Before, You Were Never Really Here