I went to a wedding this weekend at which I only knew my girlfriend and her immediate family; it’s why I haven’t written anything since Friday.  I felt I needed to make a positive impression on the bride, Emily’s (she would be my girlfriend) former neighbor and one of her oldest friends.  It worked, so I have some incredibly specific advice in easily digestible bullet point form.

1.  Imply your grooming is all about looking nice and not for opportunistic, superstitious reasons.

On dermatologist’s orders — long story short: razor burn is significantly worse for me than the average man — I’ve had a beard for the last year and a half, only shaving it once in that time because I royally screwed up trimming it.  Before we left for St. Louis Friday, I took an extra few minutes in the bathroom and emerged with a hairless face.  I looked five years younger and clean as a whistle.

What nobody at the wedding needed to know is that I mostly did it for hockey. 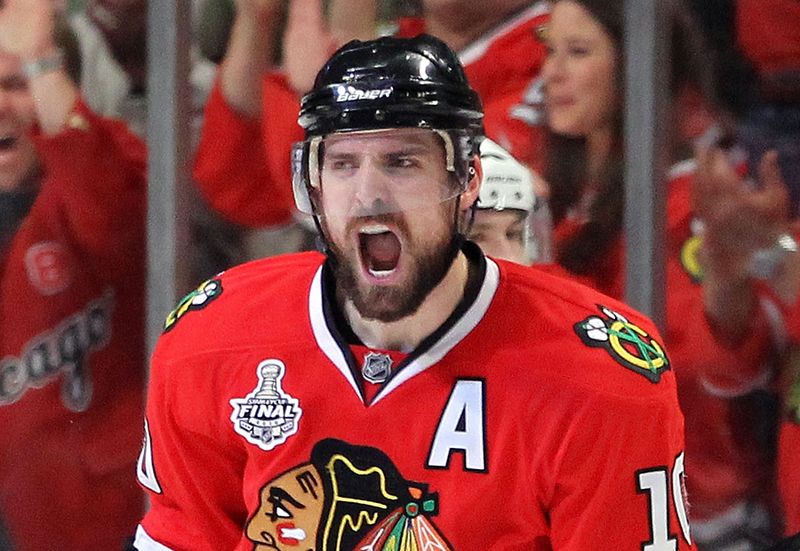 The Chicago Blackhawks’ final regular season game coincided with Saturday’s ceremony, and it is NHL tradition for players and fans to grow beards for as long as the team remains alive in the hunt for the Stanley Cup.  But you have to start fresh; no cheating.  I took the opportunity to score points with strangers by doing something I planned for months to do anyway.  It made it extra special when I realized the Hawks would likely (and Sunday’s games’ results bore this out) play the St. Louis Blues in the first round, and my superstition took place in a room surrounded by Blues fans.  They have received enough support from the baseball gods in that town, so my covert call to the hockey gods to continue my favorite team’s run of success shouldn’t be too much to ask.

2.  Don’t be too creeped out by the pop-up town where the wedding takes place.

New Town, St. Charles, Missouri, is an unnerving place.  It’s beautiful, with European-style canals, a town square designed for foot traffic (including a comic book store, which I greatly appreciated), and gorgeous brownstones everywhere.  But there’s something amiss about it.

It appears out of nowhere in the middle of a giant field.  Everyone is pleasant, too pleasant.  Children ride their bikes and laugh without being snotty bastards to the people in their way.

New Town feels like a 19th century utopia town.  The idea is to pull for each other and be self-reliant, a mark of perfection the rest of us lowly degenerates on the outside must strive to be, just as Sir Thomas More intended it.  Lucky for those of us at the wedding, we visited the place before it devolved into bickering and bitter strikes over the disgust at having to do everything for the “benevolent” overlord who created the town.  Disaster narrowly averted.

3.  Prepare yourself so as to avoid complaining about physical pain.

My dress shoes look nice.  They shine, they fit well enough, and I look good wearing them.  They also hurt like the Dickens if I wear them too long because the heels are razor thin.  I once walked a mile to a job interview in them and my heels bled and scabbed for weeks.  Why women wear shoes that do this to them regularly, I cannot comprehend.

There is a simple solution: insulation.  I need to wear more than nylon dress socks.  I tossed on my thick cotton Haynes socks and slid the dress blacks over them.  The bright white shone through the black, but my feet didn’t bleed.  I did not complain, and all was well.

I am not good at dancing, but I am good at looking dumb.  People like this.  Always do it.

This wedding had co-flower girls, two cousins a couple months apart in age.  They were adorable, giggling their way down the aisle.  They spent the better part of the reception hopping, running in circles, and laughing in delight.

They also chose me as their antagonist for the night.  Every time I looked at them, they stuck their tongues out, hid, or obstinately crossed their arms.  No matter how hard I tried, they would not give me high fives.  I think it was all in good fun, or maybe I’m a monstrous goon.  Either way, I started mirroring their defiance, and they had fun playing the goofy face game with me on the dance floor.  By the end of the night, with one flower girl in tears of exhaustion, I finally tapped her on the shoulder and leveled with her.

“I’ve been trying to get a high five from you all night.  It made me sad when you ran away,” I said.

Through sniffles, she lifted her hand and wound back before giving me her best high five.  The games had not been for naught.  I had succeeded.

I think people liked me.