While my other movie series, I Don’t Need No Stinkin’ Film School, looks back, I figured I should place at least one foot in the here and now of giddy anticipation.  Therefore, Can’t Wait focuses on upcoming movies I, well, can’t wait to see, along with a few reasons why.

Besides the obvious perks of dating a graduated theatre major — Who wouldn’t want to work jobs that have nothing to do with your passions and eat five-minute rice three nights a week? — I’ve been introduced to many plays I would never have otherwise encountered.  Among Emily’s (she would be my girlfriend to the one person who reads this site who’s not a lifelong friend or family) stack of paperback plays, I reached for Tracy Letts’ Bug, a southern gothic horror/drug paranoia tale that bore itself into my head.  When I heard Letts had adapted another of his plays, Killer Joe, to be directed by New Hollywood bad boy William Friedkin (The Exorcist), I pledged to see it as soon as possible.

That trailer only heightens my excitement.  Matthew McConaughey, suddenly willing to stretch on the screen (I’m also rabidly anticipating his turn in Jeff Nichols’ Mud), goes into force-of-nature mode.  His boots, his lascivious grin, his profession (cop with hitman work on the side), everything points to his Joe entering the pantheon of great film villains.  The protagonist, though, is Emile Hirsch, who will hopefully continue on the path he started in 2007’s Into the Wild, with his portrayal of a moral-free young man who hires McConaughey to murder his mother for her insurance policy.

And then there’s Friedkin’s direction.  For someone as auteur theory-dependent as I am, I’ve only seen The Exorcist of his filmography.  Based on this trailer and the stories I’ve been reading in Peter Biskind’s book, Easy Riders, Raging Bulls, I need to delve further into his work.  At least in his ’70s, Oscar-winning heyday, Friedkin was a powerful, harsh man who, despite his faults, had a great deal of interesting things to say about the world.  I’m eager to see if Killer Joe lives up to that. 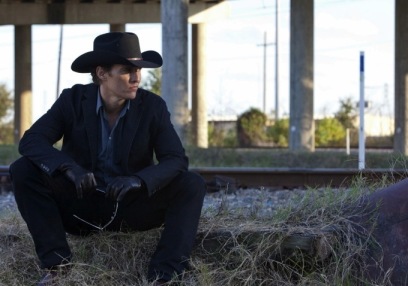