HBO Hopefully Gearing Up For Greatness With ‘Boardwalk Empire.’ 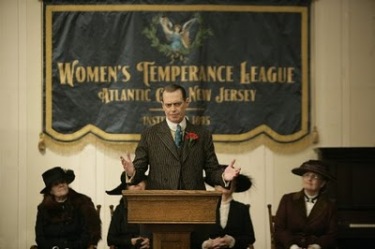 Boardwalk Empire, the 1920s period drama about prohibition in Atlantic City, from writer-producer Terrence Winter (The Sopranos) and one of my idols, Martin Scorsese (Raging Bull, Goodfellas), and starring the always great Steve Buscemi (Fargo), debuts on HBO September 19, and I will absolutely be watching for all the corruption, political and literal back stabbing, and acting gravitas this series promises.

Watch this trailer to see what I mean.

Despite its television budget, this show looks beautiful.  The period clothing and those lush exterior shots of the boardwalk of old are mind blowing.

But, of course, it’s the talent involved, both behind and in front of the camera, that will get me watching.

If Scorsese, one of the greatest living filmmakers was drawn to this project, then Winter — who, I’ll admit, is an unknown to me as I’ve never seen The Sopranos — must have written one hell of a script, based on the book by Nelson Johnson. Scorsese directed the pilot, but his role as an executive producer indicates he’ll be involved with the series well beyond the first episode, and that is certainly something to get excited about.

Taking a look at the cast, it’s apparent the show is going for mostly talented character actors to surround their star, Buscemi.  This allows his wiry neuroses and magnetic charm to take over and carry the show.  It will be interesting to see what he can do as a man of power instead of the odd bit player.

I wish this was on right now.  But I guess I’ll have to wait.