I am a big White Stripes fan. Everything about the band appeals to me. The minimalism, the brother/sister (ex-husband/ex-wife?) dynamic, the marimbas on “Get Behind Me Satan.” Seriously, everything. When I first heard a few years ago that Jack White was starting a band with Brendan Benson, another highly talented musician with a knack for Jackson Browne-ish power pop, I got really excited. 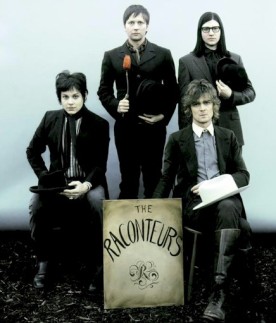 “Finally,” I thought, “White gets to expand on his sound and play rock god!” Then they seemed to fulfill some of their promise with the first single, “Steady As She Goes.” The drumming is much more straightforward and technically sound than Meg White’s “smash and pray it stays in time” style. The dual guitar and call-and-response lyrics were great. There was even a weird keyboard solo thrown in, and as a sucker for keyboards, my expectations were raised quite a bit.

The rest of that first album, while solid, isn’t a classic by any means. “Hands” and “Together” would fit on any of Benson’s fantastic solo releases and “Broken Boy Soldier” ranks up there with all the best psychedelic rock of the ‘60s. Sure, some parts lag a bit, like the bluesy closer “Blue Veins” but overall it’s a very good rock album and better than the vast majority of stuff out there these days.

Where the band faltered a little was with their sophomore release, “Consolers of the Lonely.” On this album, they went all Led Zeppelin on me (and for those of you who know me, that’s a bad thing). Whereas White does his best work with eccentric roots rock and Benson’s best songs are always light pop numbers about girls, they instead tried to be world-conquerors. I got my wish for White to become a rock god and I didn’t like it as much.

Don’t get me wrong. None of it is ever bad, and “You Don’t Understand Me” is so good it sounds like it could be on the Reservoir Dogs soundtrack, and the guitar work on album opener “Consoler of the Lonely” is exceptional, but it lacks the specialness of their other regular projects. They swing for the fences on the album and instead end up as another “workmanlike” band, solid but never quite knocking it out of the park. I do like the band quite a bit and I’ll buy their next album (that’s right, I still buy CDs), but I really hope the respective members don’t give up their original gigs.