I’ve wanted to be a lot of things in my life: comic book artist, Mark Grace, screenwriter, you name it. The first one isn’t going to happen because, well, I’m not very talented at art. The second has a chance if I start getting really good at hitting doubles and having sex with fat women. And the third? That’s something that actually does have a shot. However, out of all the things I’ve ever wanted to be or jobs I’ve wanted to have, I’d say having Carson Daly’s job would be the best. 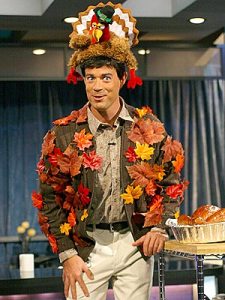 No, seriously, this is what I want in life.

Sure, I’ll field lots of skepticism about it, but if you think about it, he has the cushiest job around. He has a television show that begins at 12:30 AM Central Standard Time, making sure he never has to worry about ratings, especially being on the black hole of suck that is NBC (Conan excepted). And now with the glut of late-night shows his network is churning out, he’s been “forced” to change the format of his show from another boring-celebrity-promotes-their-new-whatever to something where he travels around with a cameraman to various cool spots of Los Angeles where he gets to eat awesome food and be a drunken buffoon for about five total minutes of filming. He’ll usually meet up with a celebrity just to hang out for a few minutes and talk, oftentimes with no promotional agenda, either.

No, seriously. This is what I want in life.

The rest of his show is then comprised of a performance or two of an up-and-coming artist, usually in the indie rock or underground hip hop genres, and the vast majority of them are great. Say what you will about his inability to be funny ever or his being a tool, the man has a pretty damn good ear for new musical talent. Bands I’ve recently started listening to due to their appearances on his show are The Duke Spirit (think a modern day Jefferson Airplane, but from England) and Nico Vega (cool dance rock band). Sure, there are a few clunkers, like the shit storm of horrible that is Asher Roth’s suburban white boy rap. But even in instances like those, the artist gains a lot of recognition, as Roth’s “I Love College” has become a staple on university campuses nationwide.

I have no idea if this type of opportunity will ever present itself to me, but if I had a chance to be “the next Carson Daly,” I would be really excited. I’d get to eat all the free food I want, sit and chat with some cool famous people, and promote the music that I want to listen to as opposed to just having the network make me present another Nickleback clone. That’s a hell of a gig if you ask me.